About 50-60 million years ago during the Palaeocene period, County Antrim in Northern Ireland was subject to intense volcanic activity, when highly fluid molten Basalt intruded through chalk beds to form an extensive lava plateau, things then began to cool, as they did somewhat of a phenomenon took place.
Massively long hexagonal columns were formed, If this were boggling enough for you to see with your own eyes, on closer inspection another twist awaits you

In many cases the horizontal fracture has resulted in a bottom face being convex while the upper face of the lower segment is concave, producing a ‘ball and socket’ effect.

It completely baffles you, because the columns are perfectly hexagonal, and on the odd few it is clear to see a perfect circle/bulbess effect going on, Con-vexed, like it had almost been manufactured this way and could be bought from a specialised builders merchants. 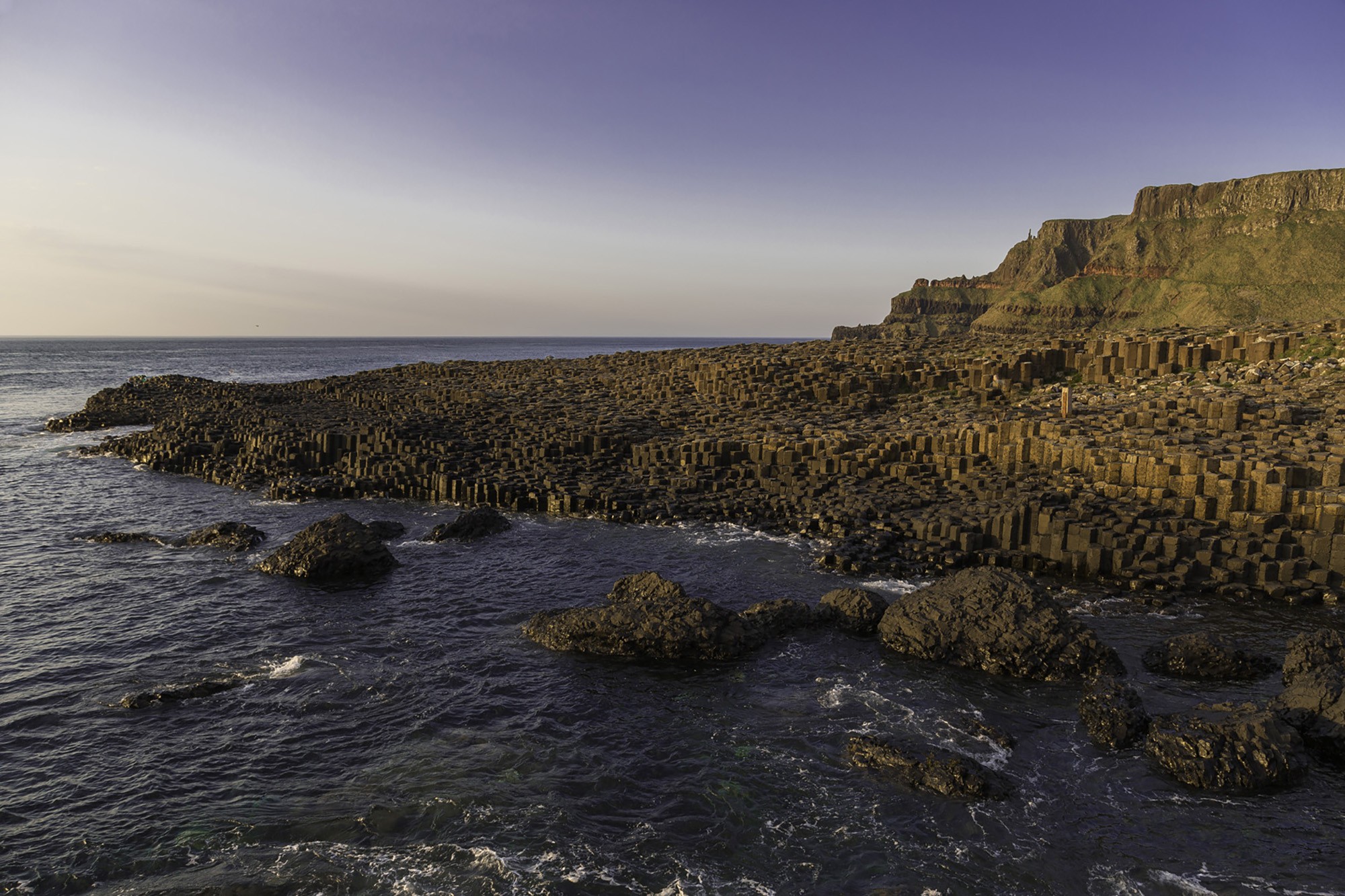 It is not only Ireland that holds these bizarre formations, there are exactly 8 locations world wide, they are:

I had 3 clear days to catch myself some hopeful keepers of this almost mythical structure, and with a little luck of the irish the weather was also being kind.

I arrived in time to be able to wonder down the road that takes you directly to the site, easy going down..but a bit of a slog coming back up. I had done my homework but thought it wise to get my bearings while I had the chance to play with some light.

Setting up your camera equipment in unfamiliar territory whist struggling for light can be a pickle, so this was a good shout. And that shout turned out to be vital, as on the first morning the heavens had opened in the early hours turning the Causeway into what seemed a Giants Ice-rink! It really was a case of steady as she goes or I was going for an early morning dip.

The days passed, the weather was nothing but perfect from start to finish, warm tones by morning, blue sky’s by day and superb sunsets by night. A good sunrise opportunity started a 3.45 every morning. The British summertime made sunsets around 9, so by the time you had packed up and walked back it was time for bed again. 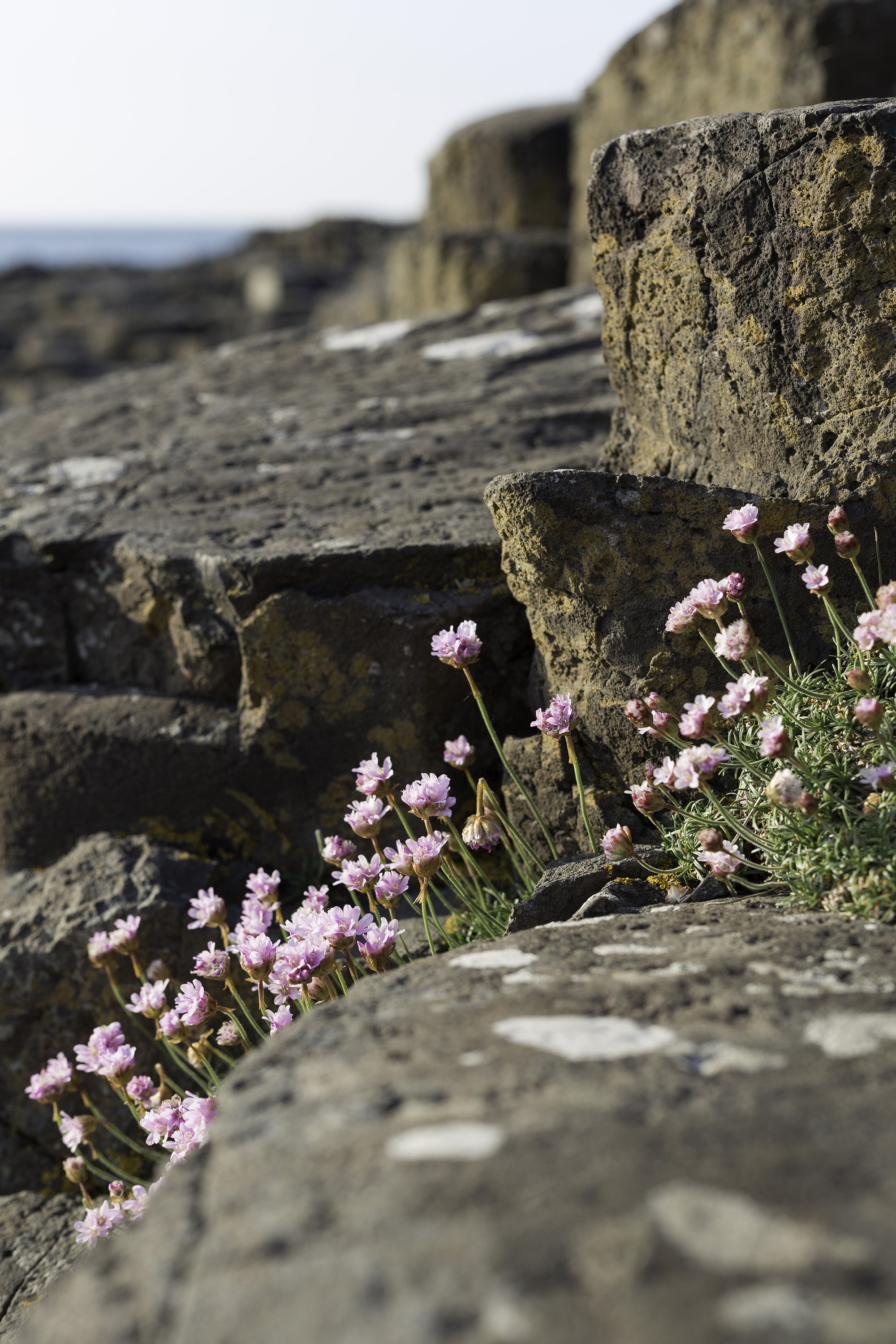 Legend has it and Gaelic mythology the Causeway was built by a Giant, where of course it gets its name.
The Giant in question is Finn, Finn MacCool (Fionn mac Cumhaill) The Giant was channelled to a fight by the Scottish Giant- Benandonner.

Finn excepted this challenge but in order to fight the Scottish giant he first had to build a path to reach him. Finn built the Causeway across the North Channel so the two could meet and do battle.

Fingal’s Cave on the Isle of Staffa, Scotland, is one of the 8 locations with this exact same structure, funny enough where Finns path would have ended and is geologically correct….but I’m sure that’s all due to evolution not Giants,right?….who knows..?!

The discovery of the Giant’s Causeway was announced to the wider world in 1693, and to this day it is a World Heritage site. If you are a lover of the big outdoors, love your coastal walks this will not disappoint. Villages that are close by are relatively basic but stacked full of charm, the famous Bushmill’s distillery is located close by and is also somehting not to be passed by. The people are incredibably friendly and cant help you enough, although you might find yourself asking them to repeat the odd sentence and to speak a tad slower!

I was always told that a Guinness in Ireland was different to that anywhere else in the world. Surely, it couldnt be the case and be ‘that’ much difference?
How right they are. It was pure silk!